Sergio Ramos put the Whites ahead from a corner and Casemiro put the back in front from another set piece.
Estadio de Gran Canaria

1
2
Real Madrid played in Las Palmas 15 years after their last visit and picked up an important victory in the first trip to the Estadio de Gran Canaria. Half way through the first half the Whites took the lead, with both sides having had chances prior to the opener. The home team had the first chance in the 10th minute but Keylor Navas saved well from Willian José in a one on one.

Another good chance came 14 minutes later. An excellent pass from Modric between the lines set Cristiano Ronaldo through but he was unable to get the better of Javi Varas in the one on one. From the attack came the first goal for the madridista. Isco took the resulting corner and Ramos headed home. The Whites were in front and almost doubled the lead in the 29th minute. Lucas Vázquez was incisive on the wing and he pulled one back for Cristiano Ronaldo on the edge of the area but his shot was deflected inches wide of the Gran Canaria goal.

The second half got underway and the stand out man was Keylor Navas. The goalkeeper demonstrated his fine form getting the better of Nili on two occasions in the 65th and 67th minute. Madrid also came close in the 70th minute with a spectacular effort from the edge of the area that went just wide. The home side continued to look for the equaliser and five minutes later from an indirect free kick in the area, Momo's shot was deflected behind by Casemiro.

Nervous ending
It seemed that the madridistas had the game under control but Willian José leveled things up in the 87th minute. The Whites were quick to react and just 2 minutes later were back in the lead from another dead ball. Jesé took the corner and Casemiro got above everyone at the back post to score with his head. In time added on Sergio Ramos was sent off for a second yellow card but Real Madrid were able to see the game out and picked up three more points in the league. 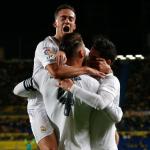