The side beat Fiatc Joventut by 102-50 to win the competition for the fourth time on the bounce.
Real Madrid have been crowned champions of the Endesa Minicopa after winning the final at the Coliseum de La Coruña after overcoming Fiatc Joventut by102-50. With this victory, the U-19's sealed their fourth successive win in the competition following the triumphs in Vitoria, Málaga and Gran Canaria.

The U-19's started the game strongly and didn't once trail throughout all of the game. Sdenry González was the top points scorer in the first half with 14 points and Garuba dominated on rebounds with 23. Real Madrid went in at the break leading +25 (50-25).

Scoring ability
At the interval López Palacios' charges continued to exhibit all of their offensive prowess. The side managed to surpass the 100-points mark for the first time this season, thanks to the points recorded by Rubén López (25), Sdenry González (16), Boris Tisma (20) and Pablo Rodrigo (20). The game ended with the Whites racking up their highest advantage of the game (+52, 102-50).

The perfect tournament
The Real Madrid side dominated in the competition right from the off. In the group stages they racked up three wins in three with Movistar Estudiantes (53-97), Barcelona (87-67) and Unicaja Málaga (89-63) all falling victim to Real Madrid in the first stage. 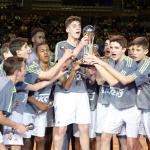