“I want our fans to know that we are going to give our all to try to win as much silverware as possible”, he said at the ‘Marca’ awards, at which Sergio Ramos also picked up an accolade.
Cristiano Ronaldo was awarded with the 2014-2015 Pichichi Trophy at Marca's awards ceremony held at Madrid's Goya theatre in recognition of finishing top of the goalscoring charts in the last La Liga campaign. The forward, who netted 48 goals in 35 games, had words of thanks as he took to the stage to collect an accolade he has now won on three occasions: "I dedicate this to the team, the coach, the coaching staff and to Real Madrid as a whole because without them I wouldn't score as many goals. This trophy is for the people who work with me on a daily basis".

"I'd ask our fans to keep on getting behind us because their support is magnificent. Us players are going to go out and give our all to try to win titles and lift the Champions League".

"I've been in Spain for six years and for me, this is the best league in the world. It's a brilliant and highly competitive league, with some great players. It's a privilege to play here, and I want to stay on for a few more years, until my contract runs out, and then we'll see about the future".

Ramos: The national team's best player
Sergio Ramos also claimed an award at the event. The Real Madrid captain scooped the Luis Aragonés Trophy as the Spanish national team's best player last term: "It's always exciting to win individual awards, and particularly this one, because of the name behind it". Carlo Ancelotti was also amongst those to be recognised as he picked up the Miguel Muñoz Trophy for the best coach in La Liga last season. 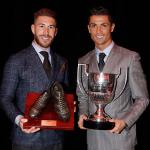