85
Real Madrid is the king of the Cup. The Whites came through an emotional final beating Herbalife Gran Canaria by 81-85 and continuing to add to the legend after claiming their 26th Copa del Rey. Pablo Laso's side recorded their third consecutive Copa del Rey, something that had never been done in this format of the tournament. Ayón was chosen as the MVP of the tournament.

Carroll got the final under way with a three-pointer in a game that Real Madrid looked solid. The Whites were strong on the paint with the Ayón-Reyes pairing forcing Gran Canaria to shoot from outside. Rabaseda (2 three-pointers) was the only one capable of scoring. With Maciulis sticking to his thing (5 points, 3 rebounds) and Ayón with his usual accuracy around the basket (6 points), Real Madrid we able to open up +10 difference, which at the end of the first ten minutes was at +6 (18-24).

Yellow reaction
Gran Canaria didn't want the Cup to get away and Pablo Aguilar led his team forward (6 points). While Real Madrid with Rivers (5), Reyes (4) and one from Lima were able to give Ayón a rest and the demonstrated a strong defense stopping Omic, solid on the rebound (5) and successful in attack (4 points). Chacho brought speed to the game and made it +9, with Gran Canaria reducing it to 2 (38-40) with a 2+1 from Newley and a three-pointer from Báez on the buzzer.

After returning from the locker rooms, the game began with an electric start. Gran Canaria racked up a 6-0 run, until Carroll appeared, scorer of 6 points. Oliver took control for Gran Canaria (5 points) and Maciulis (great tournament from the Lithuanian) continuing to be successful from the three-point line taking the score to +6 (52-58). A three-pointer from Pangos kept the yellows in the final (59-62).

Tight end
A dunk from Ayón and a three-pointer from Sergio Rodríguez opened up the +8 on the board (59-67). Chacho commanded the Whites' attack and a three-pointer from Rivers saw the biggest lead of the game open up at +12. But the revelation team of the tournament didn't give up and reduced the difference with three-pointers from Oliver and Rabaseda (76-82, min. 39). Real Madrid knew how to see out the final minute despite the attempts from the yellows. The final ended 81-85 in La Coruña, the lucky city for the team who have now won four titles there and made it the second trophy of the season after winning the Intercontinental. 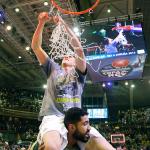 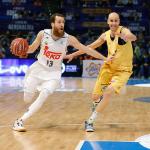