1
1
Real Madrid kept going until the end but ultimately slipped up at La Rosaleda in a game which began at a frantic pace. There were up to three clear goalscoring chances in the opening half hour. Málaga pressed high up on the Real Madrid backline as the hosts fashioned the first two opportunities of the game, but neither Juanpi or Horta were able to get the better of Keylor Navas. The visitors almost produced an immediate reaction. Some excellent play from Marcelo saw the Brazilian pick the ball up on the edge of the area before evading two defenders before brilliantly laying the ball off to Jesé, and with only Kameni to beat, the goalkeeper's outstreteched foot kept the effort out.

It was a warning for the home side, and the visitors succeded in breaking the deadlock with their next chance. On 33' Kroos delivered a free-kick and Cristiano Ronaldo nodded home. The Whites had an opportunity to double their advantage two minutes later. Ronaldo was once again at the centre of things after being tripped by Weligton in the area but the Portuguese forward's penalty was well kept out by Kameni.

After Real Madrid nearly established a two-goal lead, the home side very nearly restored parity on 39'. Cop only had Navas to beat but the custodian was equal to the effort and Ramos was on hand to turn the ball over the bar for a corner. The Whites went in at half time leading and within just four minutes of the restart Málaga could have drawn themselves level. Horta unleashed an effort and the ball deflected off Nacho but Keylor Navas once again displayed some excellent reflexes to stick out a right hand and push the ball out for a corner.

Albentosa hits the equaliser
With their next chance the hosts drew level on 66'. The move involved Málaga's central defensive pairing. Weligton found himself in the box after having gone up for a corner and he provided the assist for the unmarked Albentosa to fire home
for 12 yards.

The Whites had to go again with just 20 minutes remaining and Zidane's side, who remain unbeaten in 2016, kept on going right until the death. James had a chance to have won it for the visitors in injury time, but Kameni grasped the Colombian's volleyed effort. The Whites come away from La Rosaleda with only a point to show for their efforts. 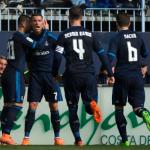