Real Madrid beat Barcelona and qualify for the last 8 in Berlin.
Real Madrid Juniors won the prestigious Ciutat de L' Hospitalet tournament. The Whites are the team that have won the tournament the most times (10) and are also the only team to have won it 3 times in succession. Real Madrid beat Barcelona in the final by 50-48, in a very even game with Dino Radoncic influential in the second quarter, the academy player who has already made his debut with the first team recorded 11 points.

Unbeaten
The madridistas, who were drawn in group A, got the competition underway with a win against Olimpija Ljubliana (36-68), and later defeated Maccabi Teddy Tel Aviv (69-49)  and Joventut de Badalona (50-60). In the semi-finals, Real Madrid beat Brose Baskets 64-52. 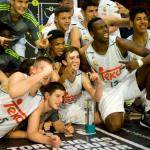