Benzema scored for the Whites, who kept going right until the death.
Benito Villamarín

1
1
Real Madrid drew at the Benito Villamarín in a game which they deserved to win. Right from the off it looked like being a difficult night as Betis took the lead on 7' through Cejudo's volleyed strike. Real Madrid would have to come from behind, and from this point onwards there was only one team in the game, as the visitors totally dominated possession. Just after the fifteen-minute mark, Benzema could have levelled things, but his effort was collected by Adán on 17'.Five minutes later Isco also had an effort on goal, but again he was thwarted by Adán.

The clearest chance in the opening half fell to Cristiano Ronaldo on 32'. The Portuguese picked up the ball on the edge of the area, before looking up and exchanging passes with Benzema, but when through with only Adán to beat, his left-footed strike failed to hit the target. Three minutes later, the Whites appealed for a penalty after Petros had clearly stepped on Benzema's foot, just as the Frenchman was preparing to pull the trigger.

The second-half
Real Madrid ensured that they weren't caught out at the beginning of the second-half, which turned out to be very different to the first. Benzema could have restored parity on 50' but his strike from the penalty spot after a series of deflections was turned away with no great ease by Adán. The visitors continued to pour forward and five minutes later James' volley from a Kroos corner was clutched by Adán.

An even clearer chance came the way of Carvajal on 70'. Marcelo played an inch-perfect ball from the opposite flank and the academy graduate, who had only entered the fray minutes earlier for Danilo, brought the ball down, but he dragged his shot wide of goal when he only had the home goalkeeper to beat.

Benzema scores
Only a minute later and the Whites made no mistake. Kroos found James and the Colombian teed up Benzema, who fired home into an empty net. This was the Frenchman's sixth goal in the last four and Real Madrid still had twenty minutes to complete the comeback. They could have taken the lead on 79' after through a Zidane-inspired move. Kroos took a short corner with Modric, who returned the ball to the German on the edge of the area with an delightful through ball. The German's pull back was met by Benzema, but Adán pulled off a fine reflex save.

The Whites had already shown that they would keep banging on the door right until the death, and that's how it turned out. Cristiano Ronaldo had two chances to have scored. His shot on 85' zipped past the upright and one minute later he met Carvajal's cross but Adán blocked his effort. 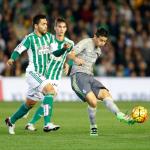