Two from Benzema and one each for Bale and Cristiano in an excellent first half sealed victory for the Whites.
Santiago Bernabéu

1
Real Madrid thrashed Getafe on Saturday to rack up their fourth victory on the trot, in a match they dominated from the off and had won inside just over fifteen minutes. The hosts were quickly in front in an exceptional first-half performance. It took them a mere four minutes, as two men lining up in defence combined on the right flank, Lucas Vázquez feeding Pepe before the Portuguese centre-half's cross was turned in by Karim Benzema with a fine first-time finish.

It was proving a barnstorming display in attack from Madrid, and Getafe had little reply to the onslaught. In the 11th minute, James Rodríguez centred and Benzema looked to grab his second with a superb headed attempt, only for Vicente Guaita to pull off a prodigious stop. However, the visiting keeper's intervention simply served to postpone the inevitable. James hung the ball to the far post, Gareth Bale nodded towards the penalty spot and the Frenchman found the net once more, this time taking three touches: the first two to control and set himself up for the shot with his right, and the third to score with this left.

With the clock barely past the quarter-of-an-hour mark, the Whites were already two to the good, and a wider margin was prevented only by Guaita's save from a powerful 23rd-minute Bale drive from the edge of the area, and the scant few centimetres separating ball and post when Cristiano Ronaldo tried his luck with a long-range free-kick with a little over half an hour played.

Bale and Ronaldo seal a masterful first-half showing
But Real Madrid were not to be denied in their efforts to extend their lead ahead of the break, and the Bernabéu enjoyed two more goals before the end of the first 45. First, James crossed on 35 minutes, Cristiano flicked down to Bale, and the Welshman fired in. And just three minutes afterwards, Real Madrid's fourth arrived from a counter-attack launched by Toni Kroos and rounded off by the club's all-time highest scorer. A masterclass in finishing from the BBC.

The game's tempo dropped in the second half, and Getafe reduced the arrears in the 70th minute when Pedro León delivered the corner and Alexis netted with his head. From there until the final whistle, Real Madrid limited themselves to controlling possession and taking care of their advantage, as they ensured another win. 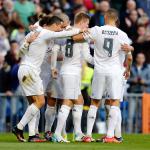