Four goals by the Welshman, a Benzema hat-trick, a Ronaldo brace and a Danilo finish secured the win against Rayo.
Santiago Bernabéu

2
Real Madrid thumped Rayo before heading into the Christmas break, and only needed three minutes to go in front. The perfect counter-attacking move in which Kroos, Cristiano Ronaldo and Bale, among others, chipped in was finished off by Danilo, who beat Yoel in the resulting one-on-one situation. The joy was short-lived though as Rayo were able to turn the scoreboard on its head in the space of two minutes. That was all the time it took between Amaya finding the back of the net with a headed effort from a corner in the tenth minute and Jozabed nodding home another past Jesús Navas in the twelfth.

The match was unfolding at breakneck speed and just two minutes later the visitors were reduced to ten men when Tito was sent off for a reckless tackle on Kroos in midfield. Real Madrid got an equaliser and managed to retake the lead before the half-hour mark. Danilo, who was very lively in attack, whipped in a perfect cross in the 25th minute for Bale to direct the ball into the goal with a towering header.

Rayo, down to nine
The turnaround was secured three minutes later. A penalty was signalled following a foul by Baena on Ramos and Cristiano Ronaldo duly stuck it away. The Rayo defender received a second yellow card as a result and his expulsion left the Vallecas outfit with nine players. Five goals had already been scored by the 28th minute and there were more to come before the half-time break. James spotted Bale get away from his marker in the 41st minute and teed him up with a defence-splitting pass. The Welshman made no mistake with just the keeper to beat to seal his brace.

Real Madrid only required three minutes to open the scoring at the beginning of the encounter, and were able to replicate the feat at the start of the second half as well. James provided the assist, as he did for the previous goal, but on this occasion it was Benzema who finished it off with a curled shot. All three members of the BBC got on the scoresheet once again, as was the case fifteen days ago against Getafe at the Bernabéu.

James' third assist
The Whites kept up the intensity as was demonstrated five minutes later when James mustered up a pinpoint cross from the left flank and Cristiano Ronaldo scored the sixth with a great diving header. A brace for the Portuguese marksman, whose tally in La Liga now reads 12. The home team continued looking for more and were rewarded with a seventh in the 61st minute. This time Cristiano Ronaldo turned provider and set up Bale who hit the target yet again, from inside the penalty area.

However, that wouldn't be the Welsh international's last goal of the day. That came eight minutes from time with a right-footed effort, after capitalising on the ball rebounding off Rayo's Quini. The British man's first four-goal haul as a Real Madrid player. There was still time for Benzema to get a ninth in the 79th minute and then grab the tenth with a left-footed strike in the 90th minute, rounding off his hat-trick and wrapping up the action on a goal fest ahead of the Christmas break. 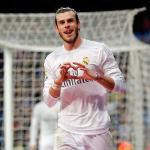