Varane was a starter in France's encounter with England at Wembley.
Six Real Madrid players are on international duty with their countries. James Rodríguez was involved in two World Cup qualifiers for Colombia, scoring the equaliser against Chile in their opening match. Raphael Varane started in France's friendly with England at Wembley, and Russia's Denis Cheryshev played for 70 minutes against Croatia.

Chile–Colombia (1-1)
Colombia–Argentina (0-1)
Colombia drew with Chile in a high-intensity game thanks to a James strike in the 68th minute. In Los Cafeteros' second match, the Real Madrid player featured for the full 90 minutes as Argentina won by a single goal.

Argentina–Brasil (1-1)
Brasil–Peru (3-0)
Argentina and Brasil drew at El Monumental in Buenos Aires. In their second game, Brazil beat Peru at the Arena Fonte Nova in Salvador. Danilo did not feature in either of the games.

Spain–England (2-0)
Belgium–Spain (Called off)
Spain beat England 2-0 in the first of their two friendly fixtures. Mario Gaspar and Santi Cazorla got the goals. Nacho did not play. The second game, against Belgium at the King Baudouin Stadium in Brussels, was scheduled for Tuesday night but was called off.

France–Germany (2-0)
England–France (2-0)
France were defeated at Wembley in a game that saw Varane play the whole match. The Real Madrid central defender also started against Germany in the first of his side's two friendlies.

Russia–Portugal (1-0)
Luxembourg–Portugal (0-0)
Pepe was given a run-out for the entirety of Portugal's encounter with Russia, while the Whites defender was unused in his team's following friendly against Luxembourg.

Russia–Portugal (1-0)
Russia–Croatia (1-3)
Cheryshev wasn't involved in Russia's win at home against Portugal. Against Croatia, the Madrid man was named in the starting line-up and played 70 minutes.

Croatia Under-21s–Spain Under-21s (2-3)
Mateo Kovacic featured throughout in his side's defeat to Spain in qualifying for the 2017 European Under-21 Championship. 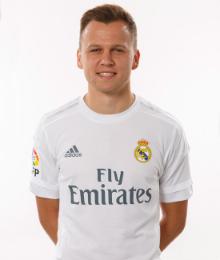