Bale did individual work out on the training field in the Whites' first session ahead of the match against PSG.
Real Madrid have begun their preparations for Tuesday's Champions League clash with Paris Saint-Germain (8:45pm CET). The major news was Gareth Bale's return to the training field, with the Welshman doing individual work with and without the ball. Dani Carvajal also took to the pitch to do running, while Karim Benzema continued with specific training exercises out on the field.

The outfield players given the longest run-outs against Las Palmas completed a recovery session inside the club's indoor facilities, although Nacho, Casemiro, Toni Kroos, Lucas Vázquez and Jesé Rodríguez also made their way out on to the training pitch to do running and stretching. The rest of the group, which included academy men Francisco Pérez Ganfornina and Dani, underwent a demanding session in which the emphasis was placed on ball work. The Whites carried out a range of possession and pressing exercises and crossing and finishing drills, in addition to playing an intense match on a small-sized pitch. 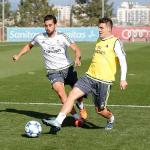