The Whites underwent training without the players due to turn out for their national teams.
The squad went through their paces for the first time this week at Real Madrid City, in a session conducted without the players due to represent their countries over the international break. Rafa Benítez included Real Madrid Castilla men Enzo Fernández, Garci, Francisco Pérez Ganfornina and Carlos Abad. Casemiro, Nacho and Luka Modric, who were involved for the full 90 minutes at the Sánchez Pizjuán, completed the first part of the work-out with the group.

A demanding session began with a warm-up with the ball out on the training field, before the Whites carried out a range of ball possession and pressing drills. The practice concluded with an intense match played on a small-sized pitch. Cristiano Ronaldo and Toni Kroos were absent from training with the coach's permission, while Kiko Casilla, Keylor Navas, Marcelo and Gareth Bale did work inside the club's indoor facilities. 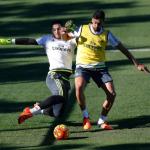