A double from Cristiano Ronaldo and goals from Modric and Carvajal sealed victory over Shakhtar Donetsk at Arena Lviv.
Arena Lviv

4
With a game still to be played in the Champions League group stage, Real Madrid have confirmed that they will take their place in the Champions League last 16 as winners of Group A, the Whites coming away from their trip to Ukraine with their mission accomplished after defeating Shakhtar Donetsk at Arena Lviv on Wednesday night.

Right from the first whistle, Real Madrid began the clash in dominant mood and in control of possession. Shakhtar were limited to waiting for their chance on the counter-attack, and could have conceded an early first. Only two minutes were on the clock when Mateo Kovacic produced a terrific piece of play to escape the attentions of three opponents and feed Luka Modric. He found Cristiano Ronaldo with a first-time pass, but the Portugese ace's left-footed shot went over.

Ronaldo opens the scoring
However, Cristiano made no mistake in the 18th minute. Modric was once again involved, spotting Gareth Bale's run and passing in behind Yaroslav Rakitskiy. The Welshman outpaced the defender to get to the ball before the on-rushing goalkeeper and knock the ball across to Cristiano Ronaldo, who nodded in from close range at the far post.

First substitution
Just after the half-hour mark, Rafa Benítez was forced into a change, introducing Danilo as Raphael Varane went off with an injury issue. The scoreboard remained at 0-1 up to the break, despite the final minutes of the half seeing Shakhtar, spurred on by home advantage, begin to create more frequent moments of danger in and around Kiko Casilla's goal.

The second 45 could not have got off to a better start. Madrid came flying out of the traps, and hit two goals in the space of two match-winning minutes. In the 50th minute, Casemiro saw the run of Cristiano Ronaldo and sent a through-ball behind the home backline for the forward to control on the run, elude Marcio Azevedo with a neat change of direction and set up Modric, the Croat arriving from deep to fire first-time past Andriy Pyatov.

Decisive minutes
And there was barely time for the second to sink in before the visitors grabbed number three two minutes later, again down the right. Dani Carvajal received the ball wide, nutmegged Azevedo and with his left conjured up a sweet curling effort that gave Pyatov no chance.

Cristiano seals his brace
Real Madrid had all but assured themselves of the points, but there was still time for Cristiano to hit his second of the match, and his fifth in total against the Ukrainians, when Bale produced a fantastic burst of pace in the 70th minute and the Portugal star netted from point-blank range at the second attempt.

Reaction from the hosts
Shakhtar reacted and, in just over ten minutes, scored three goals. Alex Teixeira got the home team's first on 77 minutes, and six after that Dentinho snatched another from a corner. With two to go in the regulation 90, Teixeira again found the net to leave the scoreline in doubt, but there was to be no further change to it. Real Madrid will go into the last-16 draw as group winners. 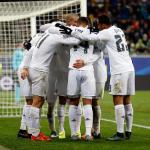