Real Madrid gave it their all right until the end but were unable to get a result against an opponent that was better on the day.
Santiago Bernabéu

4
Barcelona ran out winners in the Clásico, a match that got off to the worst possible start. Sergi Roberto made a diagonal run in the 11th minute and with his left foot set up Luis Suárez, who struck the ball with the outside of his boot to put the visitors in front. The Whites needed to come back from behind and had a few chances to grab an equaliser. Their clearest goalscoring opportunity came in the 28th minute with a move that began with Luca Modric recovering possession. The Croatian passed to James, whose strike from outside the box forced Claudio Bravo into a double save.

Barcelona's second goal came shortly afterwards through Neymar, in the 39th minute. The scoreboard read 0-2 at the break, although a goalmouth clearance from Marcelo prevented Luis Suárez from getting his second of the night just before the half-time whistle was blown.

Clear chances
The second half got off to a very different start. In the space of just three minutes, the home side created two clear-cut chances to narrow the deficit. Marcelo was at the centre of the first move. The Brazilian got away from three players and saw his shot hit the side netting in the 47th minute. Bravo had to be at his best right after that to keep out a long-range effort by James. However, just as Madrid looked most likely to score, Barcelona popped up with another. This time it was Iniesta, in the 53rd minute, who got the goal.

Real Madrid refused to throw in the towel though. Carvajal linked up with Isco in the 60th minute and his resulting shot, which came off Mathieu, was inches away from finding its way into the back of the visitors' net. With the corner that followed Bravo got his hands to a Varane header on the goal line. Cristiano Ronaldo had an even better chance in the 68th minute. Isco began a counter-attacking move that Gareth Bale kept alive but the Portuguese international was unable to get past Barcelona's keeper in the one-on-one situation that followed. A Luis Suárez goal six minutes later struck another blow.

Ronaldo effort
Real Madrid continued attacking throughout the final minutes and Bravo, who was in inspired form, pulled off another reflex save in the 80th minute, this time to keep out a goalward Benzema header. Isco received a straight red card five minutes later, but the Whites could have scored with ten men on the pitch if it hadn't been for the Chilean keeper who once again prevented a Cristiano Ronaldo header from breaching his goal in the 89th minute. Real Madrid now need to turn their attention to Wednesday's Champions League match against Shakthar Donetsk. 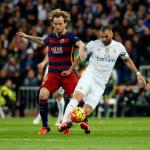