A great header from the Welshman just before half time and the penalty from the Portuguese star ensured that the Whites took three points against Éibar.
Ipurúa

2
Real Madrid got back to winning ways in La Liga against Éibar.The Whites dominated and had quite a lot of chances to close out the game before Cristiano Ronaldo scored. They came up against an inspired Riesgo and were very solid and compact when required. It is their second consecutive win and three important points at a stadium where the home side had only lost one game prior to the match today.

From the outset, Real Madrid had the initiative and the ball. Éibar were limited to waiting, stifling the visitors when they moved the ball up the field and trying to surprise on the counterattack. The home side could have paid a high price for the strategy after fifteen minutes of play. James displayed his game vision and provided Cristiano Ronaldo with a perfect ball but the Portuguese star was unable to beat Riesgo in the one-on-one. Kovacic's subsequent shot following the rebound went over.

Danger from the Whites
The Whites had already shown signs of danger and they did so again three minutes later, with a great move from Bale followed by a shot from Danilo that Riesgo stopped. From that moment until the break, only Real Madrid were in the game, and they kept trying however Modric's shot from the edge of the area in the 41st minute ended up in the hands of the Basque side's goalkeeper.

Indeed, the Croatian had another starring role in the game's decisive move. He took a short corner, James returned the ball to him, and Bale, got ahead of everyone to meet Modric's subsequent cross. It was a key goal from the Welshman, putting his side ahead before the break. He could even have bagged his brace in injury time but for the inspired Riesgo sticking out a hand to reach his shot from the ground among a web of tangled legs.

Clear opportunity
The first chance in the second half also went to the visitors. Bale delivered a right-footed cross in the 55th minute, however Ronaldo's quickly taken shot was not on target. From that moment onwards, Éibar pushed up in search of an equaliser. Real Madrid could have drowned out that reaction If Gil Mazano had awarded a penalty in the 64th minute when Cristiano Ronaldo, who was preparing to head the ball, was put off his balance in the air by Juncà.

Cristiano Ronaldo sealed the game
The Portuguese player had a clearer opportunity seven minutes later. He received a magnificent pass from Lucas Vázquez, who came on as a replacement for James in the 65th minute, and in the one-on-one with Riesgo he hit the side netting. Cristiano Ronaldo made no mistake in the 82nd minute. Lucas Vázquez was brought down in the area by Dani García and the Portuguese player converted from the spot. The Portuguese star, who had already scored in the previous two games against the Basque side in La Liga, fulfilled his goalscoring commitment against Éibar. 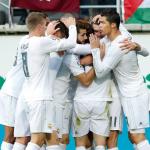