Goals from Isco, Cristiano Ronaldo and Jesé in the first half sealed the win against Las Palmas.
Santiago Bernabéu

1
Real Madrid hold a firm grip on top spot in La Liga. It is impossible to ask for much more from a side that, despite numerous injuries, continue top of the table in the league and in their Champions League group. This matchday, the victim was UD Las Palmas, a side that made their return to the Bernabéu for the first time in 14 seasons. They were not able to do much in a game that was practically decided at the outset, in less than fifteen minutes.

The home side took the lead when many fans were still finding their seats. In the 4th minute, Jesé recovered the ball 20 metres away from the area, he gave it to Casemiro and the Brazilian's pass between the defence, following a feint from Cristiano Ronaldo, led to Isco getting away from his marker. He controlled with his right foot and scored perfectly with his left. Ten minutes later the Portuguese star got a goal. Marcelo provided the assist and Ronalo dived to extend the lead with a header.

Spectacular play from Jesé
Despite having the game well on track, the ambition of the Whites and the support of their fans spurred them on to keep attacking. They almost made it 3-0 three minutes before the 30th minute. Jesé's play was spectacular. With his back turned, the Canary Island player feinted to get away from his first opponent, he then passed the ball onto himself to beat the second, and only Javi Varas' great work stopped the ball from going in.

The Canary Island side's goalkeeper once again displayed his skills in the 34th minute. The counterattack was very direct. Jesé dribbled the ball, crossed and Isco's point-blank shot led to a corner. Nobody could have predicted that things were about to change course in the game, but Las Palmas reduced the deficit with a rare piece of play. El Zhar took a corner in the 38th minute and Hernán beat Casilla with a header after the ball had come off the crossbar. The visiting side's joy was short lived. Jesé, the man of the match, needed just five minutes. He got the ball in the area, squared up to his marker, placed the ball to one side and scored.

Benítez decided to substitute Modric for Lucas Vázquez ahead of a second half where Las Palmas came out braver, however the first chance fell to the home side in the 51st minute. Isco, who got away from Vicente Gómez on two occasions, saw that Cristiano Ronado was unmarked in behind the defence, however the Portuguese player's shot was not on target.

Mayoral made his debut
There was time for Borja Mayoral to make his debut. The academy player came on as a substitute for Kroos in the 87th minute. Casilla was also enjoying his first minutes in the first team and participated in the win against the Canary Island side. The winning margin could have been bigger had Javi Varas not displayed his reflexes in injury time following a one-on-one with Cristiano Ronaldo and Lucas Vázquez' subsequent shot. The Whites hold a firm grip on the top spot and are already thinking about the difficult week ahead, they face PSG at home on Tuesday and Sevilla away on Sunday. 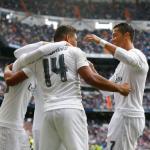