Marcelo, Cristiano Ronaldo and Jesé got the goals for the Whites four days ahead of their Champions League trip to face PSG.
Santiago Bernabéu

0
Real Madrid move to the top of the La Liga table. In a match that they had all but won in the first half on Saturday afternoon, the Whites claimed a resounding victory over Levante to take their place as league leaders, a position that was consolidated following the outcomes of the matchday's remaining fixtures. Goals from Marcelo, Cristiano Ronaldo and Jesé decided the encounter.

"We have to play with speed and consistency and try to get an early goal to open things up", coach Rafa Benítez had declared pre-match. And he was spot on. In under half an hour, the hosts had settled the clash with two lovely goals. Both came about from moments that saw possession recovered in midfield. In the 27th minute, Marcelo won the ball back, combined with Cristiano Ronaldo, continued into the box and caught out goalkeeper Rubén Martínez with an angled finish.

Just two minutes later, and after a prodigious stop by Keylor Navas from Deyverson's header, it was Toni Kroos who stole back possession in the centre of the park. He fed Cristiano and, from the edge of the area, the Portuguese star conjured up a drive of equal power and precision to find the net. He is now on six La Liga goals this season and is the team's highest scorer alongside Karim Benzema. His strike saw Real Madrid go in at the break 2-0 up.

Substitutions
Lucas Vázquez replaced Gareth Bale at half time and, on their return from the dressing rooms, Real Madrid offered no let-up as they looked to extend their lead. Kroos and Danilo tried their luck from the edge of the box on 56 and 61 minutes respectively, but on each occasion the ball finished up in Rubén's arms. Madrid continued to create danger in and around the visiting penalty area and, shortly after coming on as a 69th-minute substitute for Isco, Jesé Rodríguez sped past his man and pulled the ball back. Though his pass was awkward for Cristiano Ronaldo, the forward nevertheless managed to produce a backheeled effort that came close to surprising the visitors' keeper.

Jesé completes a comprehensive scoreline
In the 76th minute, Benítez opted to make his third and final change, introducing Marcos Llorente in place of Mateo Kovacic for his competitive first-team debut. And with the academy graduate on the pitch, Real Madrid's third arrived. Jesé received the ball wide on 81 minutes and advanced into the area, before beating his marker with a stepover and firing a powerful drive in at the near post. A comprehensive win to end the matchday as leaders, and the Whites' thoughts now turn to their midweek Champions League clash with Paris Saint-Germain. 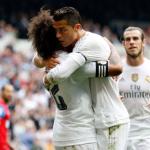