3
Real Madrid put the seal on an excellent week's work at Balaídos on Saturday, adding the finishing touch to an extremely demanding last seven days in which, despite the list of players unavailable to Rafa Benítez, they have comprehensively seen off Levante at home, drawn in Paris against PSG and defeated Celta on the road. Top spot in their Champions League group and La Liga was at stake in the last two games, and the Whites have protected both in exceptional fashion.

From the first whistle, Real Madrid came out in disciplined, compact and focused mood. During the game's initial ten minutes, the visitors monopolised possession, attacking intelligently and pressing high to win the ball back effectively. A prime example of this came in their opening goal. Casemiro stole the ball in midfield to launch a move that was all about pace and precision, with Lucas Vázquez and Cristiano Ronaldo combining for the Portuguese ace to finish.

Keylor Navas
Driven on by their home fans, Celta pushed forward in search of an equaliser and were close to finding one in the 18th minute. Fabián Orellana shot with his left foot from the edge of the area, and Keylor Navas responded with a phenomenal save. However, just when the hosts appeared to be at their strongest, Real Madrid hit them with a sucker punch as, in a fantastic attacking move, Danilo grabbed his first ever goal for the Whites. Cristiano dragged two markers out of position, and Jesé Rodríguez spotted the Brazilian's run in behind Nolito and fed the full-back, who did the rest.

Before the break, there was still time for Navas to offer up two further demonstrations of his superb reflexes. In the 40th minute, great play by Nolito saw him shake off two men and cut the ball back for Iago Aspas on the penalty spot, but Madrid's keeper was equal to the striker's effort. Three minutes later, the Costa Rican again came to the rescue to deny Pablo Hernández's header from Nolito's free-kick delivery.

Clear chance
Shortly after the start of the second half, the Whites almost hit a third goal. On 49 minutes, Cristiano flicked on to send Vázquez racing clear of Gustavo Cabral, but Sergio Álvarez was alive to the academy graduate's attempted chip and gathered the ball. After 57 minutes, Cabral saw a second yellow for dissent to reduce Celta to ten men. From there on, the match acquired an added degree of physical edge. Perhaps due to this and to avoid a second booking for Vázquez, Benítez opted to bring the player off for Isco in the 62nd minute.

Shot against the crossbar
A vibrant encounter was witnessing attacking openings for Real Madrid of increasing danger. Within just seven minutes of his introduction, Isco received the ball just outside of the penalty box, escaped the attentions of two defenders and fired in a beautifully-struck drive that Sergio got a finger to before it bounced back off the bar. Celta responded, and Marcelo's goal-line clearance prevented Nolito from scoring on 72 minutes.

Marcelo secures the win
Nolito it was who cut the deficit in the 85th minute with an exceptional shot from the edge of the box and, from there until the final whistle, Real Madrid produced a fantastic effort - just three days on from an exacting test in Paris - to contain their opponents' forward thrusts and even make sure of the three points through a lovely goal from Marcelo in added time. Denis Cheryshev's ball found the Brazilian, who first feinted to cross to leave Sergio on the turf, then stroked into the net from close range. The Whites remain top and unbeaten. 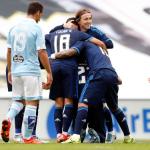