Benzema got Madrid's goal with a header and is now the top scorer in La Liga with a tally of six to his name.
Vicente Calderón

1
Real Madrid could not have asked for a better start in the Calderón. Benítez's charges were a dominant force right from the tip off. With Casemiro flanked on both sides by Kroos and Modric, the Whites knocked the ball from one side of the pitch to the other with pinpoint precision and all Atlético could do was try to contain their relentless visitors, which they managed to do until the 9th minute. Carvajal picked up the ball, knocked it past Filipe Luis to perfection and sent an exceptionally good cross into the box. Benzema made the most of the inviting ball, heading it in from close range. It was a fantastic finish by the Frenchman, who is now the top scorer in the competition with six goals to his name.

There was no let up in the action. Both teams made a big effort to breach each others' nets and Atlético came close to levelling matters. Tiago was taken down inside the box by Ramos and Undiano Mallenco pointed to the spot, however, Navas diverted Griezmann's penalty kick out for a corner in the 22nd minute. The Real Madrid keeper is in spectacular form, having already kept out two penalties this season.

From that moment until the half-time whistle, Real Madrid enjoyed the majority of the possession as well as the chances on goal, with Cristiano Ronaldo taking centre stage. The Portuguese talisman could have extended the lead, but his left-footed strike in the 33rd minute flew over the bar. He tried his luck again with a free kick five minutes later, but this time his effort went wide. Just before the end of the first half, Carvajal had to come off after receiving a knock and was replaced by Arbeloa in the 41st minute.

Bale returned
Atlético played a riskier game after the restart. Meanwhile, Real Madrid looked to capitalise on the speed of their forward men and catch the opposition off guard on the break. It was perhaps with this thought in mind that Benítez decided to bring on Bale for Isco in the 66th minute. And his change could have resulted in Madrid's second of the night in the 75th minute, however, Cristiano Ronaldo's shot, after cutting inside of Godín in a quick counter-attack, failed to find the target.

Atlético equalised
Time was ticking away and with seven of ordinary time minutes left on the clock, the ball was whipped across the Real Madrid goalmouth and poked over the line by Vietto. The dying minutes of the game were played at a blistering pace, but it ended all square at the end of the first derby of the season. There will now be an international break. 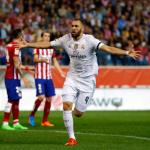