The Whites, who remain unbeaten in official competition, created the best chances and deserved more against PSG.
Parc des princes

0
Real Madrid always give a good account of themselves regardless of the opposition or the venue. In the Parc des Princes, and irrespective of the injuries Rafa Benítez had to deal with, the team drew with PSG but deserved more from the game given how many chances they created. The clearest goalscoring opportunities fell to the Whites, who, while level on points with the Parisian side, remain leaders of group A in the Champions League. The match was an intense and lively affair with back-and-forth action as both teams went out to win from the get go.

Real Madrid, who created the best chances during the first half, began the game by pressed high up the pitch and showed great tactical awareness. In fact, discarding the Matuidi long-range shot saved by Keylor Navas in the 11th minute, only the visitors ever looked like scoring.

Chances for the Whites
Jesé came closest to breaking the deadlock. Kroos, after feinting to shoot, provided the assist in the 26th minute and the slightly off-balance youth academy graduate forced a good reaction out of Trapp. The Whites continued to bear down on goal and Cristiano Ronaldo had two chances to put Madrid ahead eleven minutes later. The Portuguese ace's two headers, the first coming from a Marcelo cross and the second from a Kroos corner, were kept out by the home side's goalkeeper.

Before the half-time whistle was blown, another bit of trickery by Marcelo, who had a superb first half, set up Casemiro who, from inside the box, saw Maxwell clear his goal-bound effort.

Chance for Ronaldo
The second half was a similar story. Both teams desperately continued looking for a goal and Real Madrid came close to getting one in the 72nd minute. Modric started a counter-attack which Danilo kept alive and Jesé's strike came off Thiago Silva's back. Marcelo pounced on the loose ball and passed to Cristiano Ronaldo, whose shot went inches wide of the post.

The Whites kept plugging away until the end and deserved more in the Parc des Princes. The fight for top spot in group A will be concluded on 3 November in the Santiago Bernabéu. Real Madrid and PSG remain undefeated in official competition and have both yet to concede in this season's Champions League. 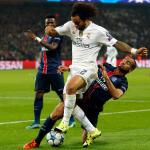