Real Madrid claim their fifth title of an historic year after winning the second game against Bauru Basket by 11 points. Llull was named MVP.
Ginasio Iberapuera

79
Real Madrid only needed one point in order to win the second game of the final series but managed to do so by 12 and were thereby crowned the Intercontinental Cup champions for a fifth time and recorded an unprecedented achievement on the continental basketball scene by a European champion: winning the five most prestigious titles up for grabs in just one year: the Euroleague, the League, the Copa del Rey, the Endesa Super Cup and Intercontinental Cup. The Whites, affected by the absences of Rudy and Taylor, overcame a tough opposition side and the harsh sending off of Sergio Rodríguez, thanks in part to the series' MVP Llull (21 points), as well as the 22 points notched up by Carroll, Thompkins' 17 and Ayón's 15 rebounds.

Madrid came out raring to go from the very first minute, showing great alertness in defence and not giving their rivals the same amount of time to shoot from distance as they had done in Friday's game. This approach soon bore its fruits and by the 5th minute they had run out to a 12-0 lead. Bauru Basket were kept completely quiet by the Whites' intensity, and they were forced to turn to their point guard Fischer and Hettsheimer to start making an impression on the scoreboard (15-11, min. 8). Carroll's three-pointers (10 points) and the entrance of Nocioni (7) ensured the Europeans held onto their lead at the end of the first quarter (24-15).

Déjà vu
With the European champions dominating the scoreline, once again the home team responded, just like they had done during the final few minutes of the first encounter. There were several factors behind this sudden surge: the Brazilians were now scoring from both outside the three-point line (two Fischer three-pointers) as well as from inside (8 points by Mineiro), some extremely unfair refereeing decisions, the harshest of which saw Sergio Rodríguez get sent to the bench for a technical foul before being receiving a further two and then being expelled (min. 15), as well as the mounting pressure from within the packed-out Ginásio do Ibirapuera. All of this led to Real Madrid dropping their tempo and seeing their lead disappear, with the scoreboard reading 29-29 at the halfway point of the second quarter.

Llull and Carroll subdue the Bauru fightback
Laso's charges learned their lesson from the first game and refused to let their rivals get the better of them again. The team's character came to the fore as Llull (11 points) and Carroll (17) pushed forward. Both players, helped by an improvement at the back, contributed to a run of 12-4 that gave Madrid breathing room yet again heading into the half-time break and put an end to the negative spell of play that had taken hold of the game (49-40, min. 20).

Madrid had no option but to deal with the questionable refereeing decisions. The team kept their heads and got through a tight third quarter, which played out as a real physical and mental battle between the sides. Reyes and Ayón put in immense performances on the paint against the charge of Bauru's Fischer and Hettsheimer, while Llull and a sensational Thompkins (7 points in two minutes) kept the Brazilians from going ahead by chipping in with points of their own (66-57, min. 30).

The hunger of the champions
Ten minutes separated Real Madrid from claiming their fifth title of the year. Not wanting to let this opportunity slip away, the team put in a heroic display during the final quarter in which Ayón dazzled when it came to grabbing rebounds (snatching 15 of Real Madrid's 40). Bauru Basket looked to find a way back in but they were given nothing to work with by the Whites' solid defence. Llull (21 points), Thompkins, who showed off his pinpoint wrist, (17 points, including two decisive three-pointers) and Carroll (22) finished off any chances the FIBA Americas Championship winners had of lifting the title (91-79, min. 40). 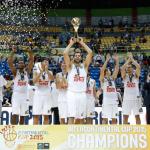