The opening goal from Benzema and three from the Portuguese star hand victory to the Whites, who are still yet to concede in competitive fixtures.
Santiago Bernabéu

0
Real Madrid showed once again against Shakhtar Donetsk that they have begun this season in great form. The Whites, still unbeaten and yet to concede, added their third consecutive thrashing on their debut in this year's Champions League, and are now leaders of Group A. PSG, also on three points, and Malmö, are their other opponents.

Madrid made a crushing start. They stormed out of the blocks and it looked like a goal would not take long to arrive. They could have scored in the 14th minute. The move was magnificent. Cristiano Ronaldo received the ball as he faced away from goal, he got away from an opponent with his turn, got past another with a slalom-like dribble and concocted a spectacular pass through defence to Benzema. The Frenchman left the goalkeeper stranded with a feint but then shot over the goal that was covered by two of the visitor's defenders. Two minutes later, the Portuguese player had another key role. He magnificently controlled a very high cross from Marcelo and sent a left-footed shot wide from the penalty spot.

The first goal
The game changed following the first 20 minutes of play. Shakhtar Donetsk, well set up and with clear ideas, grew in confidence. It seemed that the game was going to get even more difficult when Bale came off with muscle discomfort in the 28th minute, but Benzema was very attentive and took advantage of a terrible error by Pyatov, when the goalkeeper tried to catch a cross from Isco, allowing Benzema to score easily in the 30th minute. The Whites, with one man less on the pitch, took the lead. Kovacic replaced the Welshman after the goal that allowed Madrid to head into the dressing room with room to manoeuvre.

Third substitution
The second half began with another change for the home side. Pepe replaced Varane. Five minutes later, Shakhtar were down to ten men after Stepanenko's sending off for his second yellow, and five minutes after that, the home side got their second. Benzema improvised to create the move. The Frenchman, out towards the wing, cut inside Kucher and crossed back for Cristiano Ronaldo to shoot, but the strike hit against Srna. Ivan Bebek pointed to the spot and the Portuguese star converted the penalty.

Madrid had already increased their lead and Benítez was forced to bring on Nacho in the 59th minute to replace Ramos, who suffered bruising to his left shoulder during the foul that lead to Stepanenko's sending off. Four minutes later, and again from the penalty spot following a handball by Azevedo, Cristiano Ronaldo got the third. It would not be the last. Marcelo hit a volley in the 81st minute and the Portuguese player got his head to the rebound. He is in spectacular form, having amassed eight goals in the last two games.

Fourth consecutive game undefeated
Real Madrid are really delivering results in a demanding week that began last Saturday with a thrashing of Espanyol, and which will finish in four days at the Santiago Bernabéu against Granada. Two thrashings to continue undefeated with no goals conceded. The icing on the cake came with a great stop from Keylor Navas in injury time following a shot by Alex Teixeira that became dangerous following a rebound off a defender. 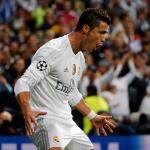