A goal by the Frenchman, who has scored in his last four outings, saw all three points go to Real Madrid, who are yet to concede a goal in a competitive fixture.
Santiago Bernabéu

0
Onwards and upwards for Real Madrid. The team have now strung four consecutive wins together. The Whites have triumphed in all three of this week's games, the first two by huge margins. Granada were the latest victims to leave empty handed against a side that so far this season have only tasted victories in the Santiago Bernabéu.

It was by no means an easy game. Despite the fact that both teams created clear goalscoring opportunities during the opening 45 minutes, it remained goalless at half time. Granada looked to open the deadlock first, but Marcelo cleared a goalward bound ball from finding its way into the back of the net in the 8th minute. Real Madrid hit back 11 minutes later. Isco split Granada's defence with an exceptional pass towards Cristiano Ronaldo, who was left with just Andrés Fernández to beat. However, the away side's goalkeeper was able to handle the situation and Benzema failed to hit the target with his follow up effort.

A chance for Ronaldo
The encounter was a tight affair although Modric could have tilted the scoreboard in Madrid's favour around the half-hour mark. The Croatian created a great bit of play in the 31st minute, linking up with Cristiano Ronaldo in the process, but his strike, following the Portuguese ace's lay up, was kept out by an inspired Andrés Fernández between the sticks.

The Andalusians' goalkeeper was keeping his side in the game but just before the half-time break it was Keylor Navas' turn to shine. The Whites' goalkeeper reacted superbly to a point-blank El Arabi effort, which was ruled out in the 20th minute, with an excellent save in the 39th minute.

The goal
Things did not change too radically after the restart. That is until the 55th minute at least, when Isco, positioned wide out on the left, received the ball, lifted his head and used his left boot to swing in a perfect cross into the penalty area, which Benzema made the most of to send a header into the back of the net. The French forward, continuing his great run of form, has got on the score sheet in his last four appearances with the team. The Whites now had a bit of breathing room, although El Arabi almost levelled matters in the 59th minute. Once again though Navas was at hand with a fantastic save to deny the visitors.

Solid at the back
Cheryshev, who came on for Benzema in the 77th minute, came close to widening the gap in the 84th minute, when attempting to make the most of an Andrés Fernández's fumble. The excitement reverberated around the stadium until the final whistle but the Whites, as they have already shown in all their matches to date this season, remained solid at the back and have still yet to concede a goal in a competitive fixture. The team have now finished their last five games with clean sheets. 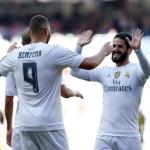