The Whites killed things off against Espanyol during a marvellous opening half hour, in which the Portuguese ace got a hat-trick and Benzema added a fourth.
Cornellà-El Prat

6
Real Madrid demonstrated in the Cornellá-El Prat Stadium that they have really started to get into their full flow. The Whites, unbeaten and yet to concede a goal in the three La Liga games to date, thrashed the Catalan side in an encounter that was settled in an opening thirty minutes of exquisite football and also added their second win of the championship so far, two results that were achieved in resounding fashion. The team have already notched up 11 goals and are the top scorers in the division.

They quickly began to direct the flow of the game and only needed seven minutes to open the scoring. Modric spotted Cristiano Ronaldo peel away behind Arbilla and played a long ball over the top from the centre circle. The Portuguese marksman did the rest by controlling the ball and beating Pau López with a delightful finish.

New record
Real Madrid had thereby broken down the five-man defence Sergio González had lined up with and then extended their lead ten minutes later. Gareth Bale was taken down inside the box by Ciani and Cristiano Ronaldo converted the resulting penalty. It was the Portuguese star's second of the afternoon, making him the first Real Madrid player to break the 100-goal mark away from home in La Liga.

The Madeira-born ace was far from done. Three minutes later he made it his first game of the season scoring three or more goals and recorded his 32nd Real Madrid hat-trick. Bale whipped in a cross and he got ahead of the defenders to finish off a training ground counter-attack with a deft touch with his left foot. The fourth goal also came through a quick bit of transitional play. This time Cristiano Ronaldo turned provider as Benzema got his name of the scoresheet in the 28th minute.

Third straight game without conceding
The visitors could have even made it five, but the Frenchman was denied a second goal when his diagonal shot came off the post. The fifth would have to wait until the second half and once again it was Cristiano Ronaldo who added to the team's tally. Bale, who had already provided an assist and won the penalty, squared the ball in the 61st minute to allow Real Madrid's top La Liga scorer of all time to find the back of the net. The Portuguese international wrapped up the fantastic result in the 81st minute by grabbing his fifth goal of the game.

Real Madrid, who have yet to concede a goal in La Liga this season, could not have gotten off to a better start in a week in which they still have two remaining fixtures. In the Bernabéu on Tuesday they will be getting their Champions League campaign underway against Shakhtar Donetsk. 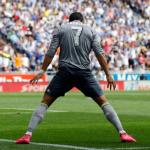