The Whites tried until the end, but came up against Kameni who was in inspired form.
Santiago Bernabéu

0
Real Madrid had a goalless draw in a game where they deserved to win. The Whites notched up 26 shots against Málaga (nine of which were on target), however they came up against Kameni in very fine form. The home side improved as the game progressed and Jesé could have made it 1-0 in the 33rd minute. The former academy player got the ball out on the wing, cut inside Rosales and his shot forced Kameni to display his talents. Isco took the corner and once again the player from the Canary Islands came up against the visiting side's keeper with a volley from the penalty spot.

Madrid began to make more frequent attacks. Cristiano Ronaldo had two chances. His left-footed shot after going past the defence hit off Kameni in the 35th minute and his spectacular volley from the edge of the area was just off target in the 44th minute. It was not the last chance of the first half. It fell to Isco. Benzema crossed and the ball went over the line following a difficult shot from the Spanish national squad player at the back post.

More attacks
The second half was very different, and began with a lot more intensity. If there were no goals in the first ten minutes, it was thanks to the excellent saves from Kameni in the 47th minute, and Navas four minutes later. The Whites tried to strike first. Carvajal crossed and Cristiano Ronaldo's half volley from the penalty spot was met by a fantastic left hand save from the visiting goalkeeper. Before there was barely time to react, Málaga responded. Recio took a majestic free kick from the edge of the area and the stretching save from the Madrid keeper was even better

The goal did not arrive, but the home side continued to have chances. Isco crossed in the 58th minute, and Cristiano Ronaldo's goal at the back post hit off Weligton's body. A minute later Jesé had a chance, that he hit over, while also injuring himself. Kovacic replaced him and Kameni continued to show off his abilities. There was spectacular link up play from Benzema and Modric in the 63rd minute but the visiting side's goalkeeper kept out the Croatian player's shot with his toe.

Besieged by the home side
The Whites, who already deserved to have scored, pressured much further up the pitch. Benzema cut inside the area and tried a left-footed shot in the 70th minute but the ball once again ended up in the arms of Kameni. Seven minutes later the most controversial piece of play took place. Isco shot, the Andalusian side's goalkeeper missed and Weligton cleared the ball when it appeared to have crossed the line. The spectators protested against the ghost goal and in the counter-attack Amrabat hit Marcelo with his elbow, leaving his side with ten men.

There were close to fifteen minutes left on the clock and the away side was almost totally besieged. The goal could have come in injury time but Cristiano Ronaldo's diving header following a cross from Marcelo was not on target. The Whites are now thinking about their first away game in this year's edition of the Champions League. Malmö awaits. 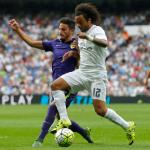