The demanding and intensive session that lasted almost two hours, began with a warm-up exercise with the ball. The Whites coaching staff then ordered players to carry out technical and tactical work and afterwards, the Madrid members did an exercise where they had to go up against opponents and shoot at goal. The session ended with a game played on a smaller-scale pitch and more attacking and defence drills. 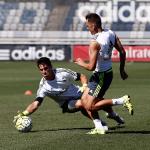