“Being the Real Madrid captain is an honour and a privilege”, explained Sergio Ramos.
The Santiago Bernabéu's presidential box was the setting for Sergio Ramos contract renewal event. During the ceremony, the defender expressed his delight about being able to further build on his legendary status as a Real Madrid player: “Being part of this club is a dream that I would like to last for as long as possible. Playing for the greatest club in the world and wearing the captain's armband is an honour and a privilege, but it also entails a level of commitment and responsibility that I will continue to approach with excitement, sincerity and honesty”.

“This was a drawn-out renewal process but my head and my heart were always here. I couldn't be happier and as I always say, Hala Madrid!”.

Incentives to stay on
“My life has been divided between my childhood, the years I spent with Sevilla and my time with Real Madrid. That was enough motivation to opt for the greatest institution in the world. Another consideration was the happiness of my loved ones. I never said that I wanted to leave. It was always my intention to stay here and my dream is to be able to retire with Real Madrid. I now have a new challenge ahead which is captaining the team, and I'll take on this role with the upmost honesty. I hope to repay this joy to the supporters by winning titles”.

Captaining style
“We all have our own way of doing things, but I've always had fantastic teachers to look up to at Sevilla and here. I've tried to pick the best bits of each one in order to carry out my role as best I can. Being the captain requires a tremendous amount of responsibility and I believe that moment has come for me. Fingers crossed I will be spoken of as a great captain and a Real Madrid legend, just like other players who have walked through these doors”.

“I believe that a captain must lead by example in all aspects. This is the best team in the world and we have to try and make whoever joins us feel identified with the crest and with what we represent. We have to give it our all on the pitch. We want the fans to go home happy because their players have given it everything. We also have to fight hard to win titles. The dressing room is full of different cultures and customs, but we all need to pull in the same direction”.

The Real Madrid spirit
“I've given everything for this crest over the course of my career and the fans know I'll continue to do so. We already know how demanding this club is, but I'm prepared to accept this risk, to try and win more titles and to keep the Real Madrid supporters happy”.

Relationship with the fans
“I hope they show me the same level of affection they have always shown me. I have never felt unloved here. We're always subject to the performances expected of us, but every Real Madrid player has to live with that challenge and show complete commitment. I've always felt really loved in the Bernabéu and I think that will continue to be the case”.

Negotiation
“It's true that I wasn't comfortable with certain things but that has all been cleared up and I'm excited now to lead this team. Had it come down to financial reasons I wouldn't have stayed, because I could have earned more elsewhere. The differences have been resolved, and if there is anyone I need to thank for this, it is the president. In a sporting sense I love him like a father and I think he loves me like a son. I am happy here so there was no use wasting time somewhere else”.

“The Real Madrid spirit has a level of expectation and a code of values that he bought into on his very first day here. Since joining, his bond with Real Madrid has been so strong that he has become a legend. This club is his home and where he will continue to make history”.

Captain
“It is very important that a player like him can continue to lead the young players who join this club by example. He not only symbolises la Décima and a never-say-die attitude, but also nobility and love for Real Madrid. He will wear the captain's armband this season, something I am certain he will do with honour and pride, just as Casillas did”.

Pride
“As the president, I feel immense pride for everything you have achieved and we know that a new, exciting period is now getting underway, this time with you as the captain. We need you more now than ever and you should know that we will always be by your side”.

The event, which was also attended by Rafa Benítez, concluded with the defender posing for a photo with his family and Florentino Pérez. 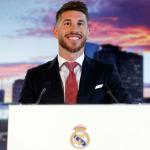