The two players were judges for a freestyle football tournament.
Bale and Marcelo were the stars of the show at an Adidas event held in Madrid's Rolling Chamartín hall. The two Real Madrid players acted as judges during a freestyle football tournament organised by the clothing brand which makes the Whites' kits. Additionally, they took a spectacular selfie as the audience applauded them.

During the event they both talked about the latest news surrounding the team. Bale was the first to take the floor in order to clear up any concerns about the knock he sustained against Sporting Gijon: “Everything is fine, I underwent tests this morning just to be certain and we saw that it was just a knock. There's nothing to worry about, I'm perfectly fine”.

“We are getting better all the time. We're learning, training and improving. With each game that passes we are becoming an even stronger unit. Obviously we are going to be an attacking side. We need to improve at the back, but we're still working on being an exciting team, one that will be going out to win everything. We've only played the first La Liga game of the season. We didn't score, but I'm 100% sure we'll get plenty of goals”.

Marcelo: “We want to make the supporters happy”
“We've already trained today. The Gijon match didn't go completely smoothly for us. We're going to focus on what we did well in order to keep improving. That was just the first competitive fixture and there is still plenty of time to go. This is the beginning of the season. We had a lot of chances but we're well aware that in football you have to score goals, creating chances isn't enough. We're going to continue on this track of improving”.

Praise for Benítez
“He's a fantastic manager. He's extremely competitive, he talks to us a lot and tries to show us what we're doing wrong so we can become better. He is attentive to each player, making sure we improve in each training session and each game. Gareth is an excellent player”.

“I always want to be improving and learning in order to make the supporters happy. I'm at the best club in the world and that helps me a lot. I've been congratulated a number of times on my goal in the Bernabéu Trophy match, but that's in the past now. My mind is focused on continuing to improve in each game”. 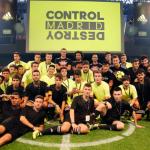