Academy graduate Nacho - with a header - opened the scoring against Galatasaray in what was the final game before the start of the official competition.
Santiago Bernabéu

1
Real Madrid managed to win the 36th edition of the Santiago Bernabéu Trophy against Galatasaray and closed out the preseason with another victory after having triumphed in two other summer tournaments: the International Champions Cups in Australia and China. A spectacular Marcelo goal in the 81st minute clinched the win for the Whites in an encounter in which Nacho opened the scoring before Sneijder got an equaliser.

From the very beginning Real Madrid were eager to make the fans happy in what was their first home game of the season. And only one minute was needed for them to carve out their first threat on goal. Cristiano Ronaldo struck from outside the box, but Muslera was able to save his effort. Not long was needed for the deadlock to be broken, with the first goal coming just two minutes after the quarter-hour mark. A Modric corner found Nacho, who leaped higher than anyone to send a perfectly-timer header into the back of the net.

The Whites had now opened the scoring, but they wanted more and Cristiano Ronaldo tried his luck on another two occasions. His strike, which was somewhat of a heeled shot in the 19th minute following two nice step overs, forced Muslera into action and his free kick four minutes later sailed inches over the visitors' crossbar. Isco came even closer to widening the gap after another Modric-taken corner. The Spanish international latched onto the rebound, shifted the ball and saw his curled effort clip the crossbar in the 33rd minute. That was not to be the final chance of the first half. Once again the goalscoring opportunity fell to the Portuguese marksman in the 45th minute. His shot from the penalty spot flew over the bar following some great play from Jesé.

Galatasaray equalise
The second half could not have gotten off to a worse start. Sneijder levelled matters with a strong left-footed strike in the 53rd minute and a powerful Sarioglu shot forced Keylor Navas in to producing the goods in the 60th minute. The lead needed to be retaken and Real Madrid made it clear that that would be their mission right until the end of the match. That was plain to see in the 65th minute following a lovely bit of play from Isco and an even better save from Muslera in the resulting one-on-one situation.

A work of art from Marcelo
The Whites kept plugging away at trying to grab a second and eventually they were deservedly rewarded for their efforts. Marcelo got the goal with a fantastic bit of play, a work of art that sent the crowd into raptures. The Brazilian picked up the ball, dribbled past one opponent, cut inside to beat another, then got past another thanks to a beautiful bit of close control and finished his run off in perfect style with a calm toe poke into the bottom corner. The Santiago Bernabéu Trophy stayed at home. This Sunday, in El Molinón, sees the first competitive game of the season. La Liga gets underway. 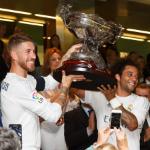