1
Real Madrid were unable to claim their third trophy of the preseason as, in their sixth fixture of the summer, Rafa Benítez's men saw their unbeaten record come to an end. A solitary goal from Robert Lewandowski in the closing moments handed the Audi Cup to a Bayern Munich side further on in their preparations for the coming season, in a clash that saw the Whites push the Germans all the way. Madrid's next test comes on Sunday, against Valerenga in Oslo.

Five players kept their places in Benítez's line-up from the win over Tottenham Hotspur, including Isco and Jesé, whose movement between the lines proved a concern for the home defence from the off, in an opening period of the game that reflected the mutual respect in existence between both teams. With Bayern's defensive set-up difficult to break down, Toni Kroos tried his luck from outside of the area, but his drive flew off target. David Alaba did the same, bringing a save out of Keylor Navas.

Six academy products
Pepe was forced off with an injury issue, Nacho coming on in his place. The Spanish defender's introduction meant that the Whites had six men on the field to have played for Castilla. Little by little, Bayern began creating openings around the Madrid goal. In the 32nd minute, a Thomas Müller effort deflected off Sergio Ramos and struck the post, before in the 43rd Navas denied Mario Götze. With the break approaching, a Real Madrid set piece saw Ramos claim a penalty for a push by Jerome Boateng.

Asier Illarramendi and Marco Asensio came on for the start of the second half, which began with the clearest opportunity for Benítez's charges, Kroos drawing a fine stop from Manuel Neuer with a free-kick struck towards the top corner. In reply, Lewandowski came close to nudging the ball in for Bayern from inside the six-yard box. Luka Modric and James Rodríguez were brought on to inject greater freshness into the midfield, while Kroos again looked to find the Bavarians' net with another powerful attempt that Neuer dealt with once more.

It was proving a hard-fought match, with a goal a possibility at either end. Danilo, recently on as a substitute, sought the opener with a volley, and Navas stopped two Bayern shots from outside of the area as the clock ran down with chances for both sides, before the encounter was decided in the 88th minute. Douglas Costa delivered the cross from a free-kick, and Lewandowski turned in. 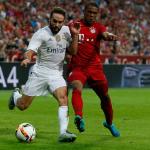