Enjoy the best moments from the Brazilian, who has played 320 matches with the Whites.
Marcelo joined Real Madrid aged 18 during the winter transfer market of the 2006-07 season. Eight and a half years later, he is one of the squad captains, has played 320 games and has scored 23 goals for the Whites. At the age of 27, the Brazilian has extended his contract with the club until 2020.

He made his debut as a Madrid player on 7 January 2007 against Deportivo against Riazor. Despite his youth, he soon became a basic pillar of the team. Throughout his time at Real Madrid, he has won: 1 Champions League, 1 Club World Cup, 1 European Super Cup, 3 La Liga titles. 2 Copas del Rey, and 2 Spanish Cups.

He scored in the final of La Décima
Marcelo has earned the affection of the Madrid fans through his work, quality, and physical displays. His contributions in attack cause real headaches for any defence. Through these attacks he has provided important assists and goals. Among these, he got one of the four goals that led to La Décima in the European Cup in Lisbon.

Last season he was one of the side's most outstanding players. The Brazilian scored four goals and provided eight assists. Also, he beat his record for matches in a single season, after playing 53. 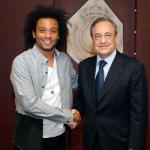