Here we review the career of the player who has risen through the youth ranks after ten years at the club.
He arrived at Real Madrid at ten years old. Now, at 23, he will form part of the  first team squad and has just extended his contract until 2020. On the cusp of his third season with the Whites, Dani Carvajal has won 4 titles as a madridista: 1 Champions League, 1 European Supercup, 1 World Club Cup and 1 Copa del Rey.

He made his official debut for Real Madrid on the 18th of September 2013. It was in la Liga against Betis at the Santiago Bernabéu (2-1). Since then the wing-back has played 88 times in six competitions, has scored 2 goals and provided 8 assists.

The madrileño is one of the youth academy's biggest success stories. He joined the club in 2002 where he began playing with the Under-11s. Year on year he progressed through the youth categories playing nine seasons and becoming a key player in the Under-19s Liga and Copa de Campeones winning season in 2009/10.

This opened the door to Real Madrid Castilla, where he became a regular starter at right back and was a driving force in the team's promotion to the second division in the 2011/12 campaign. Spending one season at Bayer Leverkusen, he returned to his boyhood club in 2013 with whom he has just renewed his contract until 2020. 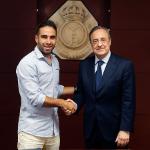