Real Madrid finalized preparations for the game against AC Milan in a training session in front of more than 300 fans.
Real Madrid completed their final training session in front of 300 supporters who were given access to Shanghai Stadium before the match tomorrow against AC Milan (8pm local time, 2pm CEST). Benzema and Modric joined the group while Illarra trained alone on the pitch.

With Keylor Navas, Casilla, Pacheco and Rubén Yáñez being put through their paces by goalkeeping coach Xavi Valero, the outfield players began the session with ball control and passing, later moving on to some more demanding exercises pressuring and keeping the ball. The training ended with some shooting practice, where every single goal was cheered by the followers in the stand, and an intense game on a reduced-size pitch. 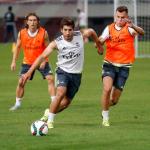