The winners of the three age categories received their trophies in the Santiago Bernabéu before the Corazón Classic Match kicked off.
Throughout the weekend, Ciudad Real Madrid played host to a festival for the Whites faithful courtesy of the Real Madrid fan clubs' 7-a-side football tournament. The event involved 150 teams from 86 such associations from all over Spain, in the age categories Under-8s, Under-10s and Under-12s.

On Saturday, Florentino Pérez was in attendance at Ciudad Real Madrid to witness the tournament. The club president signed autographs, posed for photos and chatted with the members of the participating teams.

The finals of the three age categories took place on Sunday morning, with the runners-up trophy and the winners’ and second-place medals presented by second vice-president Eduardo Fernández de Blas, Board of Directors member Enrique Pérez, and Emilio Butragueño, director of institutional relations. The champions of each competition picked up their trophies at the Santiago Bernabéu before kick-off of the Corazón Classic Match. 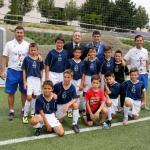