Florentino Pérez presided over the event announcing the charity game between the Real Madrid Leyendas and the Liverpool Legends on Sunday 14 in the Santiago Bernabéu.
The Santiago Bernabéu's presidential box was the setting for the presentation of the Corazón Classic Match 2015 'Tu entrada, su futuro' ('Your ticket, your future'), organised by the Real Madrid Foundation. Real Madrid Leyendas and Liverpool Legends will play each other in a charity game on Sunday 14 June (6pm CEST) in the Whites' stadium. Ticket prices will be set at €5, €10 and €15 and all the proceeds will go towards buying educational materials for more than 20,000 children at risk of exclusion as part of the Promoting Educational Success programme by the Spanish Red Cross.

Florentino Pérez, who presided over the ceremony, took the floor: “Today is not a day of celebration for Real Madrid because we have not reached another Champions League final. I understand that our fans are upset but they should know that this will make us work even harder to better ourselves and become even stronger. This has been a different kind of season, one in which we have played some spectacular football, strung a record number of wins together, and won the European Super Cup and the Club World Cup”.

“There is never time to rest on your laurels here. We always want and desire more. That is what we have inherited and we are going to continue fighting in order to win la Undécima. I would like to congratulate Juventus and thank our players and the technical staff for their effort. And thank you to all the Real Madrid fans for your ceaseless support. This club is legendary for a number of reasons, but particularly because of its members and the supporters”.

Charitable event
“There is worldwide admiration for out team's values that have made it so indestructible and undeniably great. As such, we cannot falter in our commitment to charitable work and to society's most vulnerable members. We have to make the most of our power as a club to show solidarity with those most affected by these tough times”.

“Liverpool's biggest legends will be involved in the Corazón Classic Match 2015. They are one of the world's greatest clubs, with five European Cups to their name, and are greatly admired because of their past and present. Liverpool are a club that have elevated this sport. This game is now close to the heart of our supporters. It is a traditional event and a celebration of football. We are working together with the fans for a charitable cause”.

The chief executive of Liverpool F. C., Ian Ayre, declared: “We are grateful for the warm welcome extended to us in this magnificent stadium. This will mark the first official game for the Liverpool Legends. It promises to be a fantastic match. It is a deep honour to be part of such a spectacular game. Both sets of supporters will enjoy the occasion and will help towards raising money for the Real Madrid Foundation and the Red Cross project”.

The vice-president of Grupo Atresmedia, Maurizio Carlotti, said: “We are working together to ensure that the Red Cross target is reached”. The president of the Spanish Red Cross, Javier Senent, was the last to speak: “This is the second edition of the match in which the funds raised will go towards the institution I represent. We thank all those who have made this possible”.

In attendance
Among others, the ceremony was also attended by Patricia Lázaro, the Delegate Councillor for Sports; Diego Copado, the El Corte Inglés public relations director; Orlando Ayala, the Microsoft vice-president of Emerging Markets, as well as by former Real Madrid and Liverpool players. 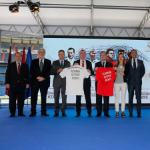