The champions celebrated the title in style.
When the game was over, joy erupted among the Madrid fans. The thousands of Whites fans in the Palacio began to chant "Champions, champions". On the court, the players and coaches celebrated with the fans and the junior team who had won the Euroleague hours earlier in their age category".

The president of Real Madrid, Florentino Pérez, came dow to the court to congratulate the champions. Then, the party moved to the changing room, where the players celebrated the win in style and took photographs with La Novena. 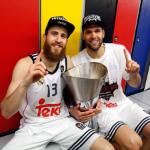