Pepe and Isco scored Real Madrid's two goals, and the side hit the bar twice and the post once in the first half.
Santiago Bernabéu

2
2
Real Madrid came close to the feat and were on the verge of turning around a 0-2 deficit at half-time with a brilliant second half where they scored two goals and could have scored a third. Everything turned against them in the 19' minute. Gayá crossed and Alcácer, just in front of goal, beat Casillas. Luck was not on the side of the Whites, who had previously hit the bar twice. Balw was the first with a fantastic free-kick in the 14' minute and four minutes later, Cristiano Ronaldo's header from a James corner hit the bar.

Madrid were not enjoying much luck, and that became even clearer when Kroos, who had injury discomfort, had to be substituted in the 25' minute. Illarra came on and a minute later Parejo took a free-kick and Javi Fuego headed the ball to get his side's second goal. The mission was becoming increasingly difficult, but if any side has shown that it is capable of overcoming adversity throughout its history, however hard it may be, it is Real Madrid.

Penalty
Bale came close to reducing the deficit in the 32' minute. His powerful shot from 30 metres out forced the visitor's keeper to make a great save. The home side kept attacking. James combined with Chicharito who linked-up with Bale and the Mexican's first touch shot hit the post. The third time the woodwork had been hit in the first half. More bad luck was impossible, however Bale went down in the area in added time. Cristiano Ronaldo took the penalty and Alves guessed his intentions. All of the second half remained to turn around the result.

After the break, Ancelotti decided to bring on Carvajal and Marcelo for Arbeloa and Coentrão. No more substitutes were made for the Whites, who were close to reducing the deficit in the 47' minute but Chicharito's shot was cleared by Alves who was in inspired form. The onslaught of the home side was very evident, as they continuously moved into Valencia's area. James crossed and Chicharito headed in the 56' minute and the goalkeeper once again performed brilliantly, sending the ball out for a corner. The corner led to the home side's first goal, a header courtesy of Pepe.

The fans in the Santiago Bernabéu surrendered to a brave side, who would look for victory until the end. Cristiano Ronaldo tried again. His free-kick in the 68' minute was just wide. Four minutes later, there was another chance from a dead-ball situation. James took the free-kick and Alves cleared Sergio Ramos' headed shot off the line. The Brazilian was saving his side.

Spectacular goal from Isco
The Whites had not had their last say. In the 84' minute, Isco got the ball on the edge of the area, he looked for space and surprised Alves with a spectacular shot. 2-2 and six minutes later. Chicharito had a chance in the 92' minute but came up against a brilliant Alves. An enormous effort by the home side, although without the deserved reward. 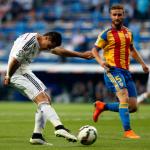