Kroos and James got the other two goals for Real Madrid, who closed out a great week against Celta.
Balaídos

4
Real Madrid are still on track to accomplish their mission of winning their final ten La Liga matches, reaching the halfway point in Balaídos. They have now racked up five victories and have a further five to go in order to overtake Barcelona in the title race. The team did not make things easy for themselves at the beginning. Nolito put Celta in front in the 9th minute with a solo effort.

Aware of what was at stake, the Whites refused to be intimidated in a stadium that urged the home team on, and found an equaliser seven minutes later. The start of the move was very similar to the goal that sealed Real Madrid's passage to the semi-finals of the Champions League. Cristiano Ronaldo linked up with James, who waited until the last moment to complete his one-two with the Portuguese forward. No one got on the end of Ronaldo's cutback, but Kroos was at hand to smash the rebound into the back of the net.

The equaliser
The Madrid players had overcome the home side's blistering start and could even have taken the lead in the 20’ had a long range Cristiano Ronaldo effort found the empty goalmouth that Sergio had abandoned to clear the ball in a one-on-one with Chicharito. The Mexican was behind the visitors' second goal, controlling the ball thirty years from the box and linking up with James twice before catching the Celta keeper off guard, who had probably anticipated a cross instead of a shot.

The joy was short lived. It lasted a mere four minutes. That was all the time Celta needed to surprise Madrid with a counterattack. Orellana provided the through ball for Santi Mina who sent a shot past Casillas in the resulting one-on-one before tapping home the rebound off the post. It was turning into a thrilling encounter. The Galicians and the European champions were exchanging blows.

Another reaction from the visitors
Evidence of just how merciless a game it was came during the dying minutes of the first half. Just as it looked as though nothing else could happen, a Cristiano Ronaldo strike hit the post in the 41’ and then three minutes later the visitors got another goal. The counterattack was stunning. Cristiano Ronaldo dribbled with the ball, Chicharito dragged his marker away and James made the most of the Portuguese star's pass to send his shot, which came off Fontás, past Sergio. 2-3 with the second half still to play.

Chicharito decisive once again
The half-time break did nothing to change things. Both teams were determined to win and provided a spectacle on the pitch. Chances continued to be created and Real Madrid could have extended their lead in the 55’, but Isco was unable to hit the target with just the goalkeeper to beat.

The killer blow
Then Real Madrid killed off any chance of their being a comeback in the 69’. A spectacular bit of play from Ramos, who brought the ball forward twenty yards before picking out a great pass with the outside of his boot, which was then bettered by Chicharito, who controlled the ball masterfully before finished the move off perfectly.

From that point on the Madrid were able to defend their lead to draw a close to a great week, in which they secured their Champions League semi-final place and came away with three points from Balaídos, a very tricky away ground. 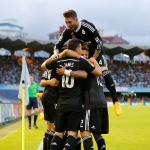