Real Madrid deserved more at the Calderón, but came up against an inspired display from Oblak.
Vicente Calderón

0
The knock-out duel between the reigning European champions and runners-up will be decided next Wednesday at the Bernabéu. Real Madrid were the better side, particularly during the first half, but an inspired Oblak performance prevented the Whites from being ahead at the half-time break. Madrid made a dominant start at the Calderón, putting concerted pressure on the ball and winning possession back quickly. In just ten minutes, they had already had three shots on goal, one a clear chance as Bale found himself one-on-one with Oblak after 4', los rojblancos' keeper producing a magnificent save.

With half an hour played, and Atlético yet to have an attempt on Casillas' goal, Bale again caused danger. Modric brought the ball down with his knee on 31' and fed the Welshman, who fired a powerful effort from more than 25 metres that once more forced the hosts' custodian into a fine stop. The Slovenian was proving Atlético's outstanding performer, a fact he underlined six minutes later with a commendable save from James' shot from the edge of the area.

It wasn't Oblak's final intervention before the break. James was again involved, as his angled drive on 42' was kept out by the Atlético keeper after a terrific forward surge by Varane. While the first half saw the away team dominate, the second was a slower affair with possibilities for both sides. Indeed, in the first 20 minutes only Kroos registered a shot on target, after 57', which Oblak dealt with.

Solid at the back
15 minutes from the end, Ancelotti introduced Isco in place of Benzema. In the final ten minutes, during which Marcelo and Mario Suárez received yellow cards that rule them out of the return leg, the home team sought a goal with direct play, but the visiting defence was extremely solid and the Whites' goal remained unbreached for a third game in a row. The tie will be settled at the Bernabéu. 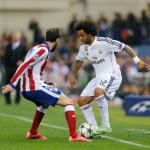