The right back is 23-years-old and is a regular fixture in the Brazil national squad.
Danilo Luiz da Silva (Bicas, Brazil, 15-07-1991) will be contracted with Real Madrid until 30 June 2021. Aged 23, he is already a regular member of the Brazilian squad. As a right back who covers a lot of ground, he is quick, technical and hits the ball well. These qualities are enhanced by a spectacular physique that makes him a real threat going forward.

After getting his first taste of professional football with América Mineiro, he joined Santos in 2010. He won the Copa Libertadores there in 2011, and scored the decisive goal in the final against Peñarol. In 2012 he made the step up to European football by joined Porto where he established himself as one of the most influential players in world football.

An Under-20 World Cup champion with Brazil in 2011 as well as a silver medallist at the Olympic Games in London, Danilo has won two Super Cups and two league titles with Porto. Last season he was the highest scoring defender in the Portuguese topflight, managing 6 goals from 29 encounters. He also found the back of the net on one occasion in the Champions League.

He is a regular fixture in the Brazil national squad. 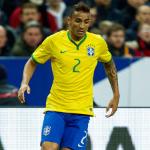