“The supporters clubs are the foundation of the Real Madrid spirit and transmit the values that have made us the greatest club in history”, said the president.
A celebration of Real Madrid in Barcelona. With a view to the Clásico, close to 500 of the Whites' Catalonia-based supporters club members met in the Maritime Museum. Florentino Pérez presided over the Real Madrid organised event, which was attended by Eduardo Fernández de Blas, the second vice-president; and Pedro López, the third vice-president, among others.

Pitingo livened proceedings up at the beginning of the good-natured and Real Madrid infused meeting for the supporters clubs. Following a rendition of the Décima anthem, Florentino Pérez took to the floor. The president, who received an ovation from the supporters club members, told them: “You are a symbol of the best fan and I know we can always count on you. The supporters clubs are the foundation of the Real Madrid spirit around the world. And much more than just the foundation, they pass on those values that have made us the greatest club in history”.

“You here in Catalonia, and especially in Barcelona, you have earned our recogintion for what you have given and your unbreakable loyalty. This team have shown they are capable of winning the Champions League becoming the best team in the world. Because these players and these coach are the men of the Décima. They have earned the love and respect of every Real Madrid fan for all time”.

“We must remain united and be fully confident about the challenges that lay ahead. We will continue fighting to obtain the Undécima and another La Liga title. We have the highest level of expectation at Real Madrid and that is what makes our club great. We won the Décima and now we are thinking about the Undécima and we have to give it our all every minute in order to retain that success”.

After the speech, the supporters club members were able to have their photo taken with the Real Madrid president, as well as with the trophies won by the club's football and basketball teams. All the those in attendance enjoyed a night of celebration, wishing to be part of the team's victory in the Clásico. 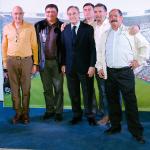