0
Real Madrid won, kept a clean sheet and looked convincing against Levante with just one week to go until El Clásico. The Whites were brilliant during the first half, scoring two goals and smashing a ball against the post and another off the crossbar. The scoring was opened in the 18’, although the first goal could have come a lot earlier through an individual bit of skill from Bale, who trapped a Marcelo cross with his chest, controlled the ball with his left and, on the half turn, dispatched a cross-shot with his right that came close to catching Mariño off guard.

The chance that came three minutes later was even more clear-cut. Modric linked up with Bale, who scooped the ball up with his left foot and, facing the opposite direction, passed to Benzema with his right. The Frenchman, with a quick lay off, set up the onrushing Cristiano Ronaldo who controlled the ball and saw his strike crash against the post. The move deserved a better outcome.

Bale opened the scoring
While the Whites' two pieces of build-up play to create their clearest opportunities until that point were exquisite, the succession of passes that led to the first goal were even more incredible. Benzema made a wall with Modric and Cristiano Ronaldo popped up with a bicycle kick after the Frenchman found him at the back stick. Juanfran cleared the ball off the goal line, but Bale, more alert than anyone, volleyed the rebounded effort goalwards with his right boot to put his team ahead.

Real Madrid were a force of nature and it was just a matter of time before they got a second goal. It could have come when a Bale cross ended up hitting the bar following a Simao clearance in the 28’, but finally came in the 40’. Modric, reading the situation very intelligently, surprised the visitors by quickly passing a free kick to Carvajal, who pulled his cross back for Cristiano Ronaldo to shoot. Bale, who was spectacular during the first half, deflected the Portuguese star's strike home to register his sixth brace as a Real Madrid player.

Benzema's finesse
Aware of their advantageous position on the scoreboard, the Whites came out after the restart aiming to kill off the match. Benzema came close to doing just that with a work of art. Resourcefulness that would occur to very few players and which even fewer could pull off. Cristiano Ronaldo whipped in a cross from the right wing in the 64’ and the French striker surprised everyone with a heeled volley that smashed off the woodwork on goalkeeper Mariño's right side. The Frenchman's effort will live long in the memory, a shot that received a deserved ovation from the supporters in the Bernabéu.

From then until the final whistle, Real Madrid carved out more chances to score and remained defensively solid to keep a clean sheet. Three valuable points with seven days to go until El Clásico in the Camp Nou. 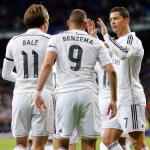