The Real Madrid president will attend the Copa del Rey basketball final this evening.
Florentino Pérez arrived in Las Palmas in Gran Canaria at midday. The Real Madrid president touched down at the airport in Gran Canaria and then travelled to the AC Iberia hotel where the basketball squad met up. There, he was met by Juan Carlos Sánchez Lázaro, head of the basketball department. He greeted the coach Pablo Laso and the players, and gave them his best wishes ahead of tonight's final against Barcelona (7pm CET).

The head of Real Madrid also wanted to attend the Mini Cup final being played by Real Madrid's Youth A team against Unicaja at the Centro Insular de las Palmas. Florentino Pérez posed for photographs and signed autographs for fans. 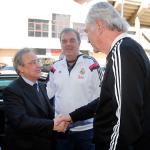