Goals by James and Jesé resulted in a win over Sevilla in a turbulent game in which Ramos had to be substituted in the 9’ and the Colombian in the 27’.
Santiago Bernabéu

1
It was a must-win game and Real Madrid accomplished their objective. Not only did they pick up three important points, which extend their lead in La Liga to four and seven points respectively over Barcelona and Atlético, but they managed to do so despite the major setbacks they suffered during a match in which they were forced in to making two substitutions before the first half hour had been played. The first change came in the 9’, when Nacho came on for Ramos.

Even so, they were able to break the deadlock early on. The move was very similar to the Whites' first goal against Real Sociedad on Saturday. It even involved the same players. Marcelo whipped in a cross from the left wing in the 12’ and James, allowing the ball to bounce first on this occasion, found the back of the net with his head. This was the second match in a row in which the Colombian got on the scoresheet.

The visitors were not rattled after going behind. They were well organised across the pitch and even threatened the Real Madrid box. The good fortune that saw Iborra's effort come off the post in the 18’ after Casillas had been beaten in the one-on-one, as well as the Madrid's captain's great reflexes to block a Bacca shot in the 22’, were key to the team hanging onto their lead during this period of the match. Things were made even more difficult in the 27’ when Jesé had to come on for James, who also had to leave the pitch with an injury.

Jesé gets on the scoresheet again in La Liga
Sevilla, for their part, had to substitute their goalkeeper in the 35’. An injured Beto was replaced by Sergio Rico, who was powerless to prevent his team from conceding another goal almost immediately after coming on. A great bit of play from Isco, who beat three opposition players and laid the ball off to Benzema, was kept alive by the Frenchman, who continued the move with a pass in the 36’ that Jesé made the most of by firing the ball into the away side's goal.

Madrid could have made it 3-0 two minutes later. Arbeloa pulled the ball back and Benzema's shot went centimetres wide of the mark. That was not to be the last chance of the first half. That honour would go to Khedira in injury time, but Rico stood up well in the one-on-one with the German.

Off the woodwork
While Jesé was the star of the show at the end of the first half, the youth team player took centre stage once again at the beginning of the second after hitting the post with a skewed effort in the 50’ and then linking up with Isco five minutes later. Rico did very well in the one-on-one with the Malaga-born midfielder. Sevilla also could have scored but Iborra's volley in front of goal was blocked in the 59’.

Made to suffer
Real Madrid looked more and more at ease as the minutes ticked by. In fact, a one-touch move between Benzema, Isco, Marcelo and the Frenchman once again, who came close to scoring, got the fans off their seats in the 66’. And just when it looked as though the game was over Iago Aspas narrowed the gap in the 80’ by finishing off a great bit of play by Vitolo. Sevilla's goal brightened up the game but the La Liga leaders were solid during the final few minutes and were able to earn three valuable points in their race to win the championship. 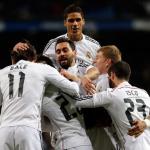