Isco's great goal and another from Benzema give the league leaders three points against a hardened Deportivo side.
Santiago Bernabéu

0
Real Madrid came out in overwhelming style. In little over twenty minutes, the Whites had already taken the lead on the scoreboard, hit the bar twice, and cleared up any doubts. Cristiano Ronaldo was the first to hit the woodwork. Marcelo crossed in the 13' minute, Bale controlled and gave the ball to the Portuguese player, who turned with agility and shot with his left foot from the edge of the area. Five minutes later, Fabricio just managed to push a powerful shot from Bale onto the crossbar.

Luck looked to have abandoned the Madrid players. That is how things continued when a pass from Benzema in the 22' minute did not find a finisher on the goal line. However, Isco took advantage of a pass from Arbeloa to score a well-executed goal, very similar to the one he scored in Almería. The player from Malaga controlled at the edge of the area, looked up and beat Fabricio with a shot that curled elegantly and effectively.

Cristiano Ronaldo starred at the end of the first half. The Portuguese player fell in the area in the 37' minute as he tried to cut inside of Luisinho, however Estrada Fernández did not award a penalty. Six minutes later the public were out of their seats following an endless dribble. Ronaldo got away from Manuel Pablo with a spectacular 'elastica'.

Casillas Save
The second half began with a scare. Just as Real Madrid had hit the woodwork twice at the beginning of the first-half, it was the turn of the Galician side to do so in the 48' following a Borges volley. Two minutes later Casilla prevented an equalizer. His stretch to save Riera's header from the penalty spot was a decisive moment.

Lucas Silva made his debut
The match opened up from that moment onwards. Both teams made more frequent attacks into the opposite boxes and Ancelotti decided that it was time to hand Lucas Silva his debut, he came on for Illarra in the 71’ minute. Two minutes later the home side scored their second. Everything was first touch. Arbeloa began the move with a magnificent pass from Cristiano Ronaldo, he provided Benzema with the assist and the French player beat Fabricio with a subtle touch.

It was an important win for Real Madrid. The Whites are still top of the table, put pressure on their rivals in the fight for the league title, and will already be thinking about their Champions League return. They continue to defend their status as European champions this Wednesday at the Veltins-Arena. 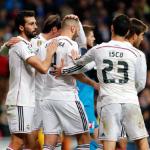