The 21-year-old, chosen as the Brazilian League's best defensive midfielder, joins the Whites from Cruzeiro.
Lucas Silva (Bom Jesus de Goiás, Brazil, 16-02-1993) is a new Real Madrid player. The 21-year-old midfielder joins the Whites after winning the Brazilian League with Cruzeiro and proving one of the stars of the championship: he was included in the CBF's (Brazilian Football Confederation) best XI and received the Silver Ball, awarded by the magazine Placar to the League's best defensive midfielder.

His signing sees Real Madrid add talent and youth to their squad. Lucas Silva is a footballer with character who is capable of being the focal point of the midfield. He has good ability on the ball and also brings outstanding defensive work. What's more, he offers terrific long-range passing and a fantastic shot.

Fixture for Cruzeiro
The new Madrid player joined Cruzeiro's youth set-up in 2007. He was loaned to Nacional in 2012, but soon returned to make the first-team breakthrough. In July of that year he made his competitive debut, and steadily became a fixture in the side.

A Brazil Under-21 international, he played a key role as Cruzeiro claimed the Brazilian title in the last two seasons. Now he has made the move to Spain to further strengthen the European champions. 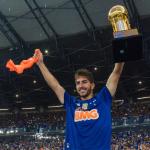