“It's an unforgettable moment in my career. I never imagined I would win the Ballon d'Or three times. I hope not to stop here", he declared.
Cristiano Ronaldo continues to reign supreme in world football. The Real Madrid forward received his third Ballon d'Or, his second in a row, at the FIFA gala held at the Congress Hall in Zurich (Switzerland). The Portuguese star, who earned 37.66% of the votes cast, saw off Messi (15.76%) and Neuer (15.72%). After being given a huge ovation as he collected the trophy, he offered a few words: "I want to say hello to my family, my son and my mother. I'd like to thank everyone who has believed in me, my coach, my team-mates, my president... Everyone who has helped me at Real Madrid."

“It has been an unforgettable year on a collective and personal level. It's something unique and I feel really happy. This motivates me to keep on going as I have up to now to try to win more trophies. I also want to say hello to my father, who is watching me from up above. Thanks also to the Portugal national team and to all the Portuguese people."

“It's an unforgettable moment in my career. I never imagined I would win the Ballon d'Or three times. I hope not to stop here, I hope to catch up with Messi, but I'm not obsessed by it. I want to go down in history as the best, and you achieve that by working hard every day."

Cristiano, who was supported by a significant Real Madrid delegation headed up by president Florentino Pérez, was crowned the world's best player after posting an exceptional year. In 2014, he scored 61 goals (56 for the Whites) and claimed the Champions League, the Club World Cup, the European Super Cup and the Copa del Rey.

The Portuguese continues to beat records on a game-by-game basis. He set the record for goals scored in an edition of the Champions League (17) and received his third Golden Shoe as the top marksman in European league football (31). At 29, he is the leader of the world and European champions. Having scooped the award in 2008 and 2013, he now has three Ballon d'Ors to his name. But Cristiano always wants more. 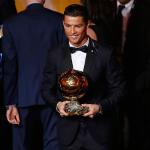