He was joined by James, Kroos and Sergio Ramos, Real Madrid's other award-winners at the FIFA Gala.
Cristiano Ronaldo claimed his third Ballon d'Or in Zurich on Monday - and it's a prize which the forward wanted to share with the Real Madrid supporters. For this reason, the Portuguese star offered the trophy, which confirms his status as the best player in the world, to the Santiago Bernabéu fans ahead of the Copa del Rey clash with Atlético. In addition, James paraded his Puskas Award for the best goal in 2014, while Kroos and Ramos exhibited their accolades as members of the FIFA FIFPro World XI alongside Ronaldo. 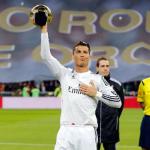