A goal from James, two from Benzema - the second a stunner - and another from Ramos turned the match around against La Real.
Santiago Bernabéu

1
Real Madrid stand firm in top spot, despite again having to come from behind in an encounter that got off to a pulsating start. In under five minutes there were two goals, one for each side and both from headers. Real Sociedad drew first blood. Rubén Pardo delivered the corner in the opening minute, and Aritz scored from near the penalty spot. With barely enough time for the strike to be digested, the hosts' reaction arrived. After 3', Marcelo produced a measured cross for James, who headed perfectly into the top corner to level the scores.

The intense start gave way to control over possession for the home team. The Whites began to create openings with greater and greater regularity, and were close to going ahead after 20'. James dinked the ball over two defenders, but Benzema's volley came back off Rulli's body. The Colombian was then again to the fore as another opportunity arrived. He it was who swung in the corner after 29', Bale's glancing header creeping centimetres wide of the woodwork.

The run of play, and the chances Madrid were creating, seemed to suggest a second was coming for them. And so it proved, arriving on 37'. The cross was provided by Marcelo, as had been the case on the first goal, and Benzema, bringing the ball down at the far post, found an inspired Rulli equal to his shot. Ramos, alive to the situation, took full advantage of the loose ball to score. A third could even have arrived before the break. On 40', a storming counter-attack was begun by Isco and continued by Benzema, but Bale's finish was off target with Rulli beaten and two defenders on the goal line.

The second half got off to a stunning start, as Real Madrid extended their lead on 52'. The move, which was beautifully worked, was deserving of the outcome. Benzema and Bale took centre stage, a one-two between the pair on the edge of the area seeing the Welshman advance into the area, using his first touch to control before lifting his head and with his second laying on an assist for the striker, who finished with his left foot from close range. And the Madrid whirlwind had not stopped there. Only good defending from Iñigo, to acrobatically clear a Bale header after 55', prevented the fourth

Spectacular from Benzema
Little more could be asked of Benzema, but the Frenchman brought the Bernabéu crowd to its feet on 76'. Winning the ball back on the flank, he combined with Isco and pulled a curling shot out of his hat, one of such perfection that Rulli could only stand and watch as the ball nestled in the top corner to his left. A wonderful goal from Benzema to cap off an excellent display - and the Madrid faithful made sure he knew it, giving him an ovation minutes later as he left the field to be replaced by Chicharito.

Rulli, in one-on-ones with Bale and Carvajal, avoided an even heavier scoreline in a great performance from Real Madrid, who remain immovable at the top of La Liga and reacted in the best way possible to the visitors' early opener. 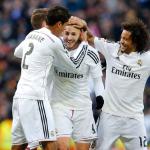