A terrific strike from James, a spectacular free-kick by Bale and a goal from Nacho handed all three points to Real Madrid, who played with ten men for 40 minutes.
Santiago Bernabéu

0
Real Madrid maintain a firm hold on top spot. The Whites claimed a comprehensive win over Espanyol despite being a man down for 40 minutes after Coentrão's sending-off, and also came away from the game with a clean sheet. From the start, the Whites showed that it was going to be difficult to stop them claiming three important points in their first game of the year at the Santiago Bernabéu. In little over ten minutes, they had already hit the post and opened the scoring.

First Benzema produced a volleyed attempt from a loose ball that ran to him following the delivery of a free-kick, but his shot after 10' - made difficult by the height of the bouncing ball - was denied by the woodwork. Madrid's first goal then came in the next opening they created, played completely one-touch and with such difficulty of execution that it added beauty to the move. Bale switched the play wonderfully from one side to the other, Cristiano Ronaldo came up with a half-volleyed assist with his left and James, arriving from deep, beat Casilla first-time with a deft effort.

If Bale had delighted the Bernabéu with his measured raking pass on the first goal, the second saw him bring the home fans out of their seats, with a masterful free-kick that hit the post on its way past Casilla after 28'. In less than half an hour, Real Madrid had offered a demonstration of their might, and were on track.

Down to ten men
The second half did not get off to the best of starts. After eight minutes, the Whites were reduced to ten men as Coentrão was sent off after a 50-50 challenge with Cañas. Ancelotti was forced to react, introducing Nacho for James to bring balance to his team.

Despite being a man down, Madrid were enjoying the most clear-cut opportunities, and were close to scoring a third. The move was begun by Arbeloa on 59' with a piece of play that saw him beat two opponents on the left wing, for Cristiano Ronaldo to drive a shot from the edge of the area that went centimetres wide of Casilla's goal. Nine minutes later, Bale could have picked up his second, but his header from Nacho's cross flew across the face of goal.

Bale was again at the centre of the action as Isco received the ball in midfield after 72' and served up an inch-perfect, defence-splitting pass for the Welshman, who was unable to beat Casilla one-on-one. The goal was coming, and arrived four minutes afterwards in a picture-book move. Indeed, practically all of the nine outfield players on the pitch were involved. The manner in which it ended speaks for itself. Arbeloa, at left-back after the sending-off of Coentrão, provided the assist and Nacho, his counterpart on the right, finished to seal a thumping victory. 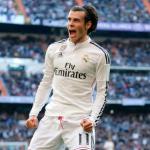